BORN TO BE KING (JUSTICE, ORDER OVER CHAOS, KINGSHIP) 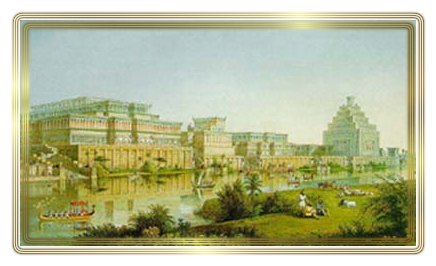 Epithets: Light of His Father, Young Steer of Day, King of Heaven, Glorious Word of Power, Overseer who is Good, Guardian of the Four Quarters, Shepherd of the the Stars, Lord of Life, Citadel of Prayer, Shepherd of the Gods, Master of Magick, Restorer of Joy to Humankind.

Marduk´s name may be read either as a genitive construction, The Young Bull of the Sun, or an an apposition, meaning like "the son, the sun", but it is not certain that this is was a Sumerian name. Like the etymology of His city, Babylon, His name may belong to a proto-Sumerian, non-Semitic linguistic stratum which is as yet unknown. Isolated mentions to Marduk exist since the Old Sumerian period, as in a god-list from Abu Salabikh. His rise to national importance was directly linked with the political success of the the First Dynasty of Babylon, and specifically its most famous king, Hammurabi. Marduk was one of the main deities worshipped by Hammurabi, as stated in the preambule to the famous Code of Laws of Hammurabi. The growth of Marduk´s cult among the people is one of the most fascinating religious aspects of the Second Millennium, and His popularity was mostly because He is seen as an approachable deity, who cares about human beings and their suffering. Together with Ea/Enki and Utu/Shamash, He is one of the triad of the most important gods of incantations, who avert evil influences. Marduk is known, like Shamash, for Justice, Impartiality and Compassion.

In the First Tablet of the Enuma Elish, the Babylonian Epic of Creation (also found in Gateways), we are told how Marduk was conceived. Basically, after Ea/Enki, the god of the Sweet Waters, Magic and all Crafts defeated Apsu, the consort of Tiamat, the Primordial Mother, he retreated to his private quarters, and named them the Apsu, the Deep, founding residence there with his wife Damkina (another epithet for Ninhursag-Ki). Isn´t it interesting that the name of Ea´s realm is exactly the name of his defeated opponent, who is Enki´s ancestor? It is as if Enki had summoned the primeval essence of the Depths as the foundation for his temple, the E-engurra of Eridu, in South Mesopotamia.

Marduk is therefore the beloved son of the Shaper - Magician and the Knowing Earth, and a very close magical friend said to me once that only the Magician who knows of the Elements Without and the High Priestess, the one who holds the Knowing from Within, could have given birth to the Emperor, or the Practical Organizer that is Marduk. This is a reference to the first Major Arcana of the Tarot, which nevertheless seem to be appropriate in this context. Let it be said though that the Tarot as we know it cannot be traced back to Mesopotamia.

We learn much about Marduk from the Enuma Elish, the Babylonian Creation Myth, which basically tells us His story. Of the baby Marduk, it is said that he was a child of wonder, that he suckled the teets of goddesses, that the gods made him perfect and all powerful from the start. As an older child, Anu, the Skyfather, gave him the Four Winds to play with. He grew to be the crown prince of the Anunnaki, the champion of the gods. When times changed, manifested by the unrest of the elders in the roar of Tiamat´s and Apsu´s tides, He was called upon by the ancient gods to defeat Tiamat, the Dragoness of Chaos and Primeval Mother of All.

The young untried hero then adventured to try and conquer the unknown and greatest of all powers,Tiamat, the ancestress who had given birth to the world that was, but that should accept change and become something else... perhaps more. Armed with bow, arrows and some magick from his father Enki/Ea, Marduk fought a battle that could have been lost but was not, resulting in the enormous effort of picking up the remains of the worthiest opponent ever to create the new order to come. This was the Mystery of Creation for the Babylonians, celebrated every single year in the twelve first days of Nisan, the first month of the year, during the Akitu festival to sing for Life and the Taming of Chaos, a task that indeed never ends.

Upon Tiamat´s death, the gods bestow upon Marduk Fifty Names and Powers, and since that moment Babylon becomes the seat of kingship and Gate of the Gods. Indeed, with the victory over Tiamat, Marduk supplants other Babylonian deities to become the central figure of their pantheon. He is a "King of the Igigi", and often works with Anu and Enki. His gifts are discernment and magick, and the firm application of the law. As the magician, Marduk is associated with the Sumerian incantation god, Asarluhi.

Marduk is also one of the main characters of another later composition, called Erra and Ishum (also in Gateways). As the ruler of Babylon and the gods, he becomes in this myth somewhat negligent and Erra challenges him by preparing to attack his people in Babylon. Marduk responds to the challenge by saying that he already killed most of the people in the flood and would not do so again. He also states that no- one would be in control of things if he got off of his throne to work up a flood, to which Erra volunteers to run things from Marduk's throne. The stalemate situation is solved by a pious priest called Ishum, who makes Erra change his ways and order return to creation. I believe that the historical background to this myth is the growing pressure Babylon felt by neighbors waging war, and the state growing incapacity to extend its ideal of peace and prosperity beyond its own boundaries.

Character: Marduk is one of the most widely powerful Mesopotamian deities, and assumes on occasion the function of almost every other deity in the pantheon, mainly because as it was stated in the Enuma Elish, He was chosen champion of the Gods against Tiamat and upon victory, received 50 names of power. Early seen as a bestower of green plants and ripe harvests through the beneficient influence of the sky-forces, He is later through the movement of the luminaries, the arbiter of each person´s destiny. He is the Shepherd of the Gods, keeping justice among them as well as ruling the four quarters of the world. When He speaks, fire blazes from his mouth. In a special way, He is the Master of Magick, particularly with the regard to the banishing of demons and to the many positive energies which can be conveyed by the magickal uses of water. He carries spear, bow, scepter and quiver, thunderbold, club or the magick net which restrains doers of evil. Upon His head is the crowned helmet and upon his hand a royal signet ring. He may appear as a winged bull centaur (who must not be confounded with the winged bull temple and palace guardians), or in colossal human form, with multiple eyes and ears.

Essentially, in all aspects, Marduk is a god of healing, regeneration, light, shimmering in rainbow colors, in whose glory His form is scarcely visible.

Now, from The Phoenician Letters, we learn also the following on Marduk´s nature:

1- "The civilising power of Marduk: See in the streets of your city a man and a maid. He shines before the people as a sun in splendour, she as the moon keeps her face to her lord. As they pass, old men sitting in their doorway smile. Old women cease to scold and the soldiers do not jostle. See in the market as they move, ripples of smiles upon the faces of the people, spreading amongst the throng. Such is the power of Marduk. See yu that golden glow that wraps them as one that is the mark of his power. It is not the power of Ishtar, much more fiery and passionate, Marduk´s power spreads peace in man.

2- Who can tell His power, who can control His might?..... His mercy that shall never be taken away. So that the stars may continue in their courses, that order may be established in the world, so that its real nature be perceived and that power, known for what it is, the power to change, to keep things living by the power of death, that all things by His power may be transformed, that all creatures come from him, living or dead, that they are all one, and depend one upon the other for their existence. He is the essence of creation, out of nothing he portrays the beauty of his creation. However, He is but the tool of his father. His power descends from Enlil and Ea, and He embodies it.

3- From all that has been written, there is one thing above all to remember, the truth of Marduk is this. ... Love is of many forms and can illuminate anything, in heaven or earth, for He is the changer of shapes, the one who cannot be restricted for long. Does the earth love the sun, or the moon the earth? Does the sun love the stars or the stars love the deep? Yes! And the green plants of earth love the creatures that eat them, and the mouse loves the hawk. When the wind fades, has love faded? And the flood, does it love the earth and the sea? If you can see this, you will know that the apple you eat loves you. It is on fire with the passion to be transformed to a higher being in you. Life loves death and all are bound in perfect love, for they were never, and will never, be separated. "

Thus, as Ea/Enki created his temple and named it Apsu, the father he defeated in combat, Marduk is the Great-Grandson of Tiamat that destroyed the Order that Was to Create the Glory that Was Babylon.

According to Professor Simo Parpola´s Tree of Life, Marduk can be equated to Chesed, and his number is 50. In the Phoenician Letters, His letter is five.