LORD OF LOVE AND FERTILITY, THE DIVINE BRIDEGROOM 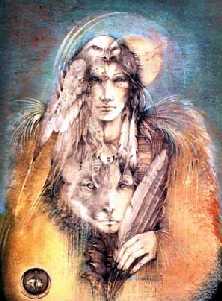 His name, usually written as "dumu.zi" means literally "rightful son"; Thorkild Jacobsen in his master work "The Treasures of Darkness" prefers "Quickener of the Young in the Mother´s Womb". In Hebrew and Aramaic, Dumuzi is called Tammuz in Hebrew and Aramaic.

Dumuzi first appears under his name in economic texts from Shuruppak (Old Sumerian period). In the god-lists and in personal names from the same time, however, he is known as "ama.usum.gal (na.na), 'the mother is a heavenly dragon'. The Sumerian King List mentions two Dumuzis, one as the "shepherd", who eventually became king of antediluvial Babtibira, the other as a fisher, who eventually ruled over Uruk. Unfortunately, there are no other historical references to these kings. Dumuzi as a divine figure was associated with Babtibira, as well as Kullaba (within the district of Uruk) This is documented by the Temple Hymns and other cultic texts from Uruk. During the Neo-Sumerian period the god was frequently mentioned in votive inscriptions, hymns and other literary and religious texts. The kings of the 3rd Dynasty of Ur showed a predilection for the religous and literary traditions of Uruk and seem to have identified themselves with Dumuzi in his role of Inanna´s consort. After the Old Babylonian period, Dumuzi appears only rarely in Mesopotamian.

Because of the importance of agriculture in South Mesopotamia especially in the 4th Millennium BCE, it is quite understandable the worship of powers of fertility, of which Dumuzi is a prominent deity.

Thorkild Jacobsen, in The Treasures of Darkness (Yale University Press, 1976, New Haven and London) says that "the cult of Dumuzi the Shepherd (Uruk, fourth millennium BC) "comprises both happy celebration of the marriage of the god with Inanna (who, originally, it seems, was the goddess of the communal storehouse) and bitter laments when he dies as the dry heat of summer yellows the pastures and lambing, calving, and milking come to an end. Thus, "as the farmer, he helps to make the fields fertile, as the shepherd, he helps to make the sheepfolds multiply, under his reign there is vegetation, under his reign, there is rich grain" (from - "The Courtship of Inanna and Dumuzi")

And, as the Dying and Resurrected God,

The pattern of the Dumuzi´s cycle and cult in Mesopotamia, in brief, is the following: courtship and wedding to Inanna, the Great Goddess of Love and War, when both consorts are young and represent the power of nature to produce new fruits. The ritual marriage of Inanna to the shepherd king Dumuzi as a Sacred Rite or Hieros Gamos is one of the highlights of the Sumerian sacred calendar. Dumuzi ( the Shepherd King ) is actually mentioned as the fifth king on the king lists of Sumer. He is also referred to as Dumuzzi-Absu of the abyss, god of freshest and running waters, and the heavenly shepherd of the stars.

Dumuzi has to overcome some problems to woo the young Goddess, because Inanna does not accept him first, having to be persuaded by Utu, the Sun god and Inanna´s brother, who supports Dumuzi, and encouraged by her mother Ningal, the Moon Goddess of Ur. But when the Maiden Goddess encounters the young Royal Shepherd, they fall in love with each other, with the echoing fullness of pastoral fecundity. Indeed, we can say that the Courtship of Inanna and Dumuzi is the very love song of creation, which fills the earth with the burgeoning splendour of life.

Inanna opened the door for him.
Inside the house she shone before him
Like the light of the moon.
Dumuzi looked at her joyously.
He pressed his neck close against hers. He kissed her.

My vulva, the horn,
The Boat of Heaven,
Is full of eagerness like the young moon.
My untilled land lies fallow.

(Wolkenstein and Kramer, Inanna, Queen of Heaven and Earth, her stories and myths from Sumer)

Passion, joy, spontaneity, exuberance are the main characteristics of the poems involving Inanna and Dumuzi, and it is possible to affirm that the Courtship is the forerunner of the Song of Songs of Solomon and Sheba.

Then, as the heat of summer dries up the pastures, and the milking of herds more difficult for the same reason, bitter laments are set up for the dying god, who will return in the next season of growth. Dumuzi's death occurs "when the grain is cut at harvest and then brewed into beer which goes into storage underground: that is to say, into the netherworld....".

A cult ritual for Dumuzi as the Dying God "began with laments sung as a sacred cedar tree growing in the compound of the temple Eanna in Uruk. The rite seems to have closed with a triumphant procession that followed the god downstream. the god appears to represent the sap lying dormant in the rushes and trees during the dry season but reviving, to the profound relief and joy of the orchardman, with the river's rise."  - Thorkild Jacobsen, The Treasures of Darkness

Another Sumerian text with the modern title Dumuzi´s Dream, also part of the cycle of Inanna, concentrates on Dumuzi´s pshychological condition after he is condemned by Inanna to replace her in the Underworld. The storyline centers about a frightening dream Dumuzi had, which is then interpreted by his sister and wine goddess Geshtinanna. When Dumuzi is about to be seized by demons, he raises a prayer to Utu, the Sun God and Inanna´s brother, who shapeshifts Dumuzi into a gazelle to flee from the envoys of the Underworld. Later, in the grand finale to this most passionate cycle, we learn that Dumuzi, by Inanna´s decree, will indeed replace the Great Goddess of Love and War in the Underworld but for six months, returning to the Heights Above when Geshtinanna, Dumuzi´s sister, descends for him. Only then Dumuzi can return to the Heights Above and bring back a new cycle of growth.

It is therefore clear that Dumuzi is one of the most complex figures in Sumerian myth and religion. He is both the male representative of humanity in connection, triumph and transcendence, the archetypal Lover and Beloved, the Divine Bridegroom of Inanna, and the Royal Shepherd, the mirror of wholeness of the gods on earth, the priest-king and ruler of the Lands Between the Two Rivers.

What are then Dumuzi´s gifts? Firstly, by wooing and winning Inanna as the young Goddess of Love and War, Dumuzi becomes the archetype of the Divine Bridgroom, the knight of courtly love in Mesopotamia. I believe we can better understand the depth of the mystery of the Divine Bridegroom and His Consort if we turn to mythographer Joseph Campbell, who says in his masterwork The Hero with a Thousand Faces:

Thus the ultimate adventure of the Lover is the mystical marriage with the Beloved, when both come together as one, equals in all levels and spheres. This whole cycle is so clearly depicted in the Courtship of Inanna and Dumuzi, where 1) the young goddess challenges Dumuzi to prove to her that he is Her equal by comparing their family background and ties of kinship; 2) Dumuzi as the Shepherd (representing the nomadic or semi-nomadic peoples who settled in Mesopotamia at a later date) also has to prove himself worthier than the farmer (the old economic order of the rural South Mesopotamia), and 3) only after the first night the couple spend together is that Inanna profers the fate of Dumuzi as the king of the land.

Be it understood that deification of the king was bestowed by the sacred rite with the goddess, or her human representative, the high priestess of Inanna/Ishtar. This is the inner meaning of the Sacred Marriage Rite: the king becomes one with the gods because of the choice of the goddess. And only the best qualify for this honour, because indeed, only the best in all levels and spheres, he who knows himself is fit to become the consort of the goddess. Why so? Because to surrender to the Lover is to embody in oneself the Beloved, relinquishing separatedness to be fulfilled by the universe.

The Lover brings therefore with him the gifts of passion, poetry, creativity, connection and empathy. He brings with him also Responsibility, because we are all responsible for those we captivate, never to manipulate or play power games with. Mentally, he can bring color and intensity to our projects and deeds. Spiritually, He is the one who serves and is Served by Love. He is therefore as the Torchbearer of the Soul and Wondrous Stranger who is Himself the Gift, and whose name means Everlastingness even if for the briefest moment.

Secondly, deified by his descent to the Underworld, Dumuzi then stands between man and the gods, between life and death as the archetypal Dying and Resurrected God. His fate in this context is identified with the annual death and resurrection of vegetation outside the irrigated land. In Mesopotamia, for a few months in non irrigated areas, a temporary desert may become real for a short while. This seasonal connection is confirmed by the astronomical position of Dumuzi. The Bull of Heaven ( = Dumuzi = Taurus) disappears for six weeks below the Sumerian Horizon (from January to March, the beginning of the Sumerian year). As we know from various cultic calendars, the partial disappearance of Dumuzi was also celebrated in a ritual journey which seems to have lasted half a year. Dumuzi started from the Elamite mountains, proceeded to Lagash and via Apisala to Enlil in Nippur. After a stop-over in Umma, he went on to Uruk and presumably Eridu until he reached the temple of Geshtinanna in Zabalam.

Finally, it is important to mention that the king in Mesopotamia represented the cosmic order in man, or a true image of God, the Perfect Man. It is this Perfect Man who weds the Goddess and thus is made divine to serve both Love and the Land.