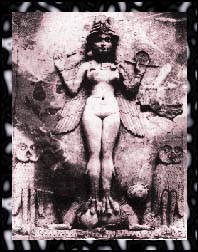 A favorite view of a Mesopotamian Goddess

For the healing of humanity´s religious history, perhaps the most important fact in the last two millennia is the retrieval of the Divine Feminine as equal in strength, passion, magick, wit, power and joy to the Divine Masculine. Sadly, the predominant image of the Divine in the last two thousand years has been of the god without the goddess, but from the perspective of world myth and religion this was not always the case in history, and I am kindly inviting you to join me in a journey upon the paths of the Soul to retrieve images of the Divine Feminine that inspired our soul ancestors of Mesopotamia, modern-day Iran and Iraq. Why so? Because the images of the feminine and masculine that come from that region belong to the beginnings of expression of human consciousness, bringing therefore with them perceptions that are at once age-old and incredibly modern to our times. The reason why for such modernity is that both the feminine and masculine were seen as vibrant, passionate, full of magick, wit and power, reflecting fundamentally a worldview that did not restrict the experience of femininity to the male-defined other, and vice-versa. We start by analysing Mesopotamian goddesses and even the first glance at Them will tell us of stories where the feminine, human and divine, resurface with a strength of its own whose impact is still so transformative that it is easy to understand why such assertive mirrors of feminine wholeness had to be systematically detracted by patriarchy.

Mesopotamian goddesses have been systematically either detracted or hardly mentioned in positive terms because They do not fit in the categories of male-defined, subservient, powerless deities that are part of post-Mesopotamian pantheons, such as sexless youthful damsels (learned, huntresses or mystically inclined), mothers (of divine fatherless children, suffering, avenging ones), etc.

Instead of these almost masochistic and poor mirrors of femininity, we have in Mesopotamia for example The Primeval Mother (Nammu, the Sea) , the Creatrix and Earth Mother (Ninhursag-Ki), who is the Beloved of the Skyfather, and later lovingly served by Her Learned Shaman (Enki) and Farmer-turned-Metallurgiest (Ninurta), the Inflexible Judge of the Underworld (Ereshkigal) to whom the Lord of War joyfully concedes defeat, the Avenging and the Joyous Brides (Ninlil, Ningal and Inanna), the Erotic Initiator (Shamhat) and the Keeper of the Flame (the High Priestess Enheduanna of Ur). Indeed, these are images of the feminine that inspire and focus on a perception of wholeness that opens up new possibilities of Being, expanding the way the Feminine relate to the world in all levels and spheres. I would go further to say that there is a vital need for both women and men come to understand that they can take up other complementing roles in a neverending adventure of becoming and search for self-transcendence.

For the purposes of this work, goddesses archetypes are described as primeval images, inner patterns that are part of the human psyche, reflecting universal and spiritual truths and that reveal ways of Being and Becoming. The analysis of the chosen archetypes for Divine Feminine will be based on Mesopotamian myths, which can also be described as the narratives by which civilisations continually struggle to make their experience intelligible to themselves by means of large, evoking images that carry philosophical meaning to the facts of life, from the mundane to the extraordinary. Myths are also powerful insight tools, and this is what concerns us most here. Basically, Mesopotamian myths approached here will show dramatic representations of human aspirations and awareness of the universe that will reveal the Divine Feminine as a vibrant multifaceted chaleidoscope representing several aspects of the experience of being a woman in all worlds.

In what follows, we will retrieve images of the Divine Feminine, and our sources will be the stories, myths and hymns inscribed in clay with the cuneiform system of writing invented by the ancient Mesopotamians, all dated from pre-biblical times. The presentation of such great archetypes is intended to demonstrate the timelessness and profound wisdom for present day generations embedded in such age-old characters. I stress that these are pre-Biblical mirrors of feminine wholeness because to understand Mesopotamia mythology and religion it is necessary to take the words of our soul ancestors as they were and not as they were interpreted and detracted by post-Mesopotamians. This is the way I choose to address the traditions that inherited their best from our soul ancestors, but did an enormous disservice to Mesopotamia either by not acknowledging their sources and/or by detracting their most important and beloved god/desses. For example, I will be generous and will not spell out the enormous harm done by a very pious Christian mystic to the figure of Inanna/Ishtar, the Mesopotamian Great Goddess of Love and War, in the Book of Revelations of the New Testament Bible. This is not the way of 'Gateways to Babylon', but this passage is mentioned briefly here to stress the point that Mesopotamia should always be interpreted in the light of the Tradition, of what was written in clay tablets by our soul ancestors, no matter how incomplete our understanding of them might be. Secondly, because we are also talking about the retrieval of the Divine Feminine, post-Mesopotamian traditions, Judeo-Christian in special, are the least indicated to serve as parameters for our task because of their reduced views on femininity, human and Divine. In Christianity, the view of the Divine Feminine is sadly restricted to the Virgin and the Mother, with no authority or religious power granted to women. Now, compare the power, secular and religious, held by Enheduanna, daughter of Sargon the Akkadian, royal princess, High Priestess of Ur and first author of world literature with the disempowered abbesses of the Middle Ages. As far as my knowledge goes, I am unable to find a synonym that approaches the concept of what a high priestess really meant and did in Mesopotamia in our modern day dictionaries and thesauri. An abbess obeyed the local priest, as well as a mother superior defers to the bishop in her community. A Mesopotamian High Priestess was above the local priesthood, being equal in authority to the king himself, as well as his consort in the Sacred Rite. In our high tech times fundamentalist religions have yet to outgrow of their prejudices to accept women in their ranks, which is certainly a very sad sign of the spiritual impoverishment.

This is very much a work in progress, because in Ancient Mesopotamia there were at least 3,000 deities, and information on many goddesses is still harder to find in today´s scholarship. We do have sources that tell us about Nammu, the Primeval Mother of All, myths that tell us of Ninhursag, Inanna/Ishtar, but these are still scarce enough for us to build a full picture. More data on Sarpanitum, Marduk´s consort, Nisaba, Tashmetum, Nabu´s beloved, would tell us much, much more about vibrant feminity. Whatever we try and reconstruct here and now should be seen as a genuine but rather incomplete tribute to the Goddesses of our Ancestors who still sing to our souls. However, from the data we have available, we can start to apprehend a vision of Femininity that involved many more possibilities of becoming. Because this is very much a work in progress, please feel free to contact me for any input on a favorite deity that you think need to be explained in more exuberant details. I have just written down a couple of heartfelt ideas which hopefully will evolve and make more sense as we go along.

This work is dedicated to the Divine Feminine who has ensouled my life with such grace. She first came out of the blue from a deep longing I did not know I had and presented HerSelf Inanna/Ishtar, the Great Goddess of Love and War, the True Image of Humanity in Triumph and Transcendence, my Personal Goddess.

Hail, Inanna, Sister-Companion along my path,
I sing your Name and bid you welcome into my heart,
You are the Star, illuminating my day and night,
Wondrous Truth, I´ve always known that I´d find.
Hail, Inanna, I lend you graces,
Hail, Ereshkigal, yours is my praise.
Trust, love and faith freely given I bring,
Mine is the voice, but for all I sing
Hail, Inanna and Ereshkigal,
Forever Queens.