THE JOYOUS BRIDE, INITIATOR OF THE MYSTERIES OF FEMININITY 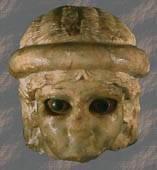 This statue probably shows the face of Ningal, the Beloved and Wife of Nanna

Sumerian goddess, whose name means Great Lady, the wife of the moon god Nanna. She is the daughter of Enki, the Lord of the Sweet Waters, Crafts and Magick and Ningikuga, the Lady of the Pure Reed, and this is an indication of Ningal´s very ancient origins, because it is by the marshes of South Mesopotamia that the first settlements were built and reeds were the raw material widely used for constructions such as huts, shrines, sailing rafts, baskets, fences against seasonal floods etc. Together with Nanna, the Moon God and Her beloved consort, Ningal was worshipped at Ur, especially during the period of the Third Dynasty. The kings of Ur III bult Her the temple E-karzida, and dedicated statues and stelae to her.

Ningal´s character as far as the myths where She figures is concerned comprehend two fundamental phases in the life of EveryWoman. She is first the beloved daughter and maiden who becomes the joyous Bride of Nanna, the Moon Lord, a bit on the shy side who by herself finds out about love and her own sexuality wooing and being wooed by the most courteous and impetuous of all the young Anunnaki gods, Nanna the Moon, the Torch of the Night, the firstborn of Enlil and Ninlil, the Prince of the Gods. Hers and Nanna´s is perhaps the second most beloved of all Mesopotamian courtship songs, and I have worked in depth with it in Nanna and Ningal - how the Moon Lord found the Lady of Dreams. Ningal is also connected to Dream Divination and Interpretation, so the link with the Moon in all senses and spheres, and introspection as well. The most beloved of all love stories in Mesopotamia is, of course, the Courtship of Inanna and Dumuzi, and Inanna, Ningal´s and Nanna´s daughter, is the archetypal and universal Joyous Bride of world myth and religion.

It is Ningal who first falls in love with Nanna, but when the young god meets the maiden goddess, he does reciprocate in kind and immediately invite her to meet him by the reeds to make wild and sweet love. Full of curiosity, Ningal goes to Nanna and for for a full, intense forthnight, hidden from the older and wiser gods, they meet and make love to each other. Then, on the eve of the night of the Dark of the Moon, Nanna says goodbie to her, promissing to return in two nights´ time.

The older and wiser gods perhaps had other ideas about the young couple´s secret sweet encounters, and found a way to hide Nanna´s moonshine from the skies for three nights. Thus, unable to contain his impatience, Nanna descends to Earth in disguise, and as a pilgrim, begging for shelter, face hidden not to be recognized, he knocks at Ningal´s door to convince her to meet him again later in the marshes.

But this time Ningal tells Nanna to wait. With the certainty of a woman who knows her own heart, mind, body and soul, she states that she would only come to Nanna when a set of requirements of hers should be fulfilled, and all these wishes involve the fruitfulness of the land, of the marshes, of wild and domestic animals and their offspring. Only if Nanna saw to these requirements, then would Ningal come to live with him in Ur. And this is exactly what Nanna does, acknowledging Ningal as his true consort and beloved.

We can see therefore in this myth that a) divine lovemaking is spontaneous and certain license is conceeded to the young in Mesopotamia, who nevertheless b) must make official their liaison and c) be faithful to the vows made to each other. I stress the point that Ningal meets Nanna for the first time (and a couple of other times too!), but it is herself that sets up a series of conditions before welcoming back the Moon Lord into the sweetness of her company. This is a remarkable example of feminine assertiveness, and the male god graciously concedes defeat and does exactly as he had been asked by the lady of his heart.

Ningal and Nanna are the parents of the two brightest lights that illuminate humankind: Utu the Sun, the Outer Light of the Day, and Inanna/Ishtar, the Great Goddess of Love and War, Love being the Truest Inner Light that makes everything special and the simplest things divine.

Secondly, as the mother of Inanna, Ningal features in many of the Sumerian love lyrics that Gwendolyn Leick (Sex and Eroticism in Mesopotamian Literature, Routledge, 1994) calls The Bridal Songs, defines as "the group of texts which feature Inanna as a girl expecting to be married" (page 66). Not much is known about social customs involving marraige and betrothal in Sumerian times, but contracts and legal texts suggest that girls were married soon after the onset of their menarche, and could be betrothed or contractually married much earlier. Prospective union and financial arrangements were agreed by the parents, and there seems to have been some transfer of gifts from the groom to the bride, while she was given a portion of her father´s wealth as a dowry. This background shows that at least for the upper classes the sexual union of the young couple was important and should be based upon mutual consent and delight.

Fundamentally, the Bridal Songs concern with the preparation for and the anticipation of wedding bliss, when groom and bride meet on the threshold of the bride´s home. They talk very much about the first longings and joyous expectation the young couple feel to meet in public or in hiding to get to know each. Ningal in the Bridal Songs is Inanna´s loving mother and initiator of the young goddess in the Mysteries of Femininity. It is to her that Inanna runs to upon the arrival of Dumuzi in their home, and Ningal gladly answers the girl´s questions and guide her on what to wear, say, act and expect from the upcoming events. Indeed, we could very well say that Ningal preceeds the archetypal Fairy Goddessmothers of later fairy tales.

Here lies a profound healing for the Feminine in all levels and spheres, because it is clear the bond and trust between Ningal the mother and Inanna, the daughter, as well as the embedded social norm that a girl´s initiator into full adulthood should be preferably her mother. Incidentally, in Enlil and Ninlil, Ninlil´s mother offers the advice of caution, to which Ninlil and Enlil paid lip service. I may risk a hunch that nowhere in world myth and religion is a mother-and-daughter relationship so joyous and trusting on both sides such as in Ningal and Inanna.

Leick says that "the voice of the bride expresses desire and usually concentrates on her 'object of desire'" (page 68). We can see therefore that Inanna expresses all that Ningal as a young lady could not tell her mother Ningikuga about Nanna, and it is clear to see that having learnt to assert herself with Nanna, Ningal empowered her only daughter to express her feelings, to act and prepare herself to welcome the beloved into her life. I never cease to marvel at the depth, trust and joyous complicity of Ningal and Inanna, another Mesopotamian brilliant example of feminine wholeness.

Finally, it is Ningal´s sad fate to lament the downfall and destruction of Ur, her city, in the famous Lamentation over the Destruction of Ur. In the second millennium before common era, if not earlier, she was introduced to Syria probably via Harran, the ancient centre of moon-worship. In Ugarit She was known as Nikkal.