LADY OF THE BEGINNING, THE SUMERIAN GREAT CREATRIX 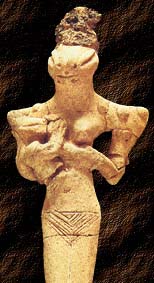 Nammu is the Sumerian Creatrix Goddess. Her name is usually written with the sign engur, which is also used to write Apsu. She personifies the Apsu, or the sweet fertile waters, as the source of water and hence fertility. God-lists and other texts describe Her as "The Mother who gave birth to Heaven and Earth", "Mother, first One, who gave birth to the gods of the universe", or "Mother of Everything". She is a goddess without a spouse, the self-procreating womb of the universe, the primal matter, standing for the female Sex as the one apparently able to create spontaneously, as expressed in a hymn to the temple of Eridu, "E-engurra, womb of Abundance".

Of Her, Samuel Noah Kramer (History begins at Sumer, 1981, the University of Pennsylvannia Press, Philadelphia) says:

Thorkild Jacobsen (Treasures of Darkness. 1976, Yale University Press, New Haven, London) calls Nammu "the deification of the river bed" and fertile marshlands of South Mesopotamia. All these views, on the whole, can be summarized the following way for South Mesopotamia: Creation came from and was accomplished by the Divine Feminine, the Goddess, from the Fertile Waters, whose presence was so marked that She was conceived as ever existent.

Nammu is therefore as old as the beginning of religious consciousness in Mesopotamia and as timeless as life itself. This may be the reason why Her appearance in the corpus of texts that have survived is not that significant: as the Mother of All Creation and Created, Her presence underlies all there is and not necessarily need to be mentioned. A gifted creator/trix is generally acknowledged by his/her successors and deeds.

In myth and religion, Nammu is the Mother of Enki, the god of the Sweet Waters, Magick, Crafts and Wisdom, and Ereshkigal, the Goddess of the Underworld. More importantly, Nammu is the goddess who has the idea of creating humankind as a help for the gods, and it si She who goes to wake up Enki, asleep in the Apsu, that he may set out the process going. Also, Ur-Nammu, the founder of the Third Dynasty of Ur, is named after Her.

Historically, Nammu may well have been worshipped in Eridu before Enki, who took over most of her prerogatives and functions. In spite of Her decline following the superiority of Enki, during the Neo-Sumerian period, at least at Ur, She was highly regarded, and statues were commissioned in Her honour, Her name featuring in many family lists.