MAGIC AND RELIGION IN MESOPOTAMIA

What was the difference? 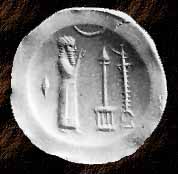 Man praying to the symbol of Marduk (shovel) and the standard of Nanna. Plate, new-Babylonian.

Magick and religion for Ancient Mesopotamians were inseparable parts of the same whole, because both were seen as the link between the physical reality and the subtle spheres of existence. This is the reason why many invocations inscribed with the cuneiform writing system contain the expression "BY THE DURANKI", i.e. BY THE BOND OF HEAVEN AND EARTH, which, in my opinion, constitutes the Mesopotamian way of saying AS ABOVE SO BELOW much before the Emerald Tablet of Hermes Trismegistus in Egypt. More specifically, through religion the Ancient Mesopotamians had a code of established practices, mystical and practical, to contact the Gods, seen as the cosmic powers which had created the universe, and humankind to serve Them and complete for Them the workings of existence. Magick, on the other hand, can be described as the techniques Ancient Mesopotamians put into practice to make sense of the universe as an animated and multifaceted reality in order to affect facts or predict future happenings in real life and the physical world.

Clearly, within this context, the dividing line between religion and magick becomes rather blurred, because magical practice in Mesopotamia involved the practice and religion and vice-versa, once the magical arts were practiced by priests and priestesses in temples and in specialties which involved all sorts of human endeavor: healing, counseling, the sciences, etc. It is easy to conclude that to practice religion was (and still is) a magical act. How can we affirm this? Simply because belief, faith, trust, dedication, devotion and love are characteristics of the Divine within and without, and can only be perceived by the Eyes of the Spirit and the Opening of the Soul in all levels: physical, emotional, spiritual. This was the worldview of Ancient Mesopotamians, because theirs was a world were Nature was not separated from the Divine, where the Mundane was a reflex of the Extraordinary and where the events of daily life had a foundation in the skies. I quote from Zur's and Smith's The Phoenician Letters: "In the skies, signs; in fire, visions; in water, forms; on earth, words" (pg. 15).

It is very difficult to conceive a world where everything was animated by the Inner, the Outer only being a Garment of the Whole. Polytheism meant in this context to see the sacred in every single manifestation of life in the universe, and as such Air, the Sun, the Moon, the Stars, all animals, minerals, everything there was had a corresponding Higher Form, which should be approached with due respect and given their dues. Anu was the firmament and also the Skyfather, Ki was the Earth Mother and also the Living Earth. The Sweet Waters were Enki, and revealed the Joy of the God of Wisdom, Magic, Crafts and of the Sweet Waters. Inanna was the Lover and the Beloved, the Warrior and the Deliverance of What Must be No More. No wonder then the immense number of deities they had in their pantheon! Everything was endowed with and by the Spirit, who was Named and as such, Recognized. Also remember that for the Mesopotamians, who painstakingly took notes and made lists to classify the universe, everything was part of a major whole, not separated or dissociated from the Source. It is a sad characteristics of modern times to separate in several compartments what should be seen as an intrinsically interrelated reality.

A second point that should be taken into account to understand and redeem the role of magick and religion in Ancient Mesopotamia relates to terminology. The large majority of terms that reached us today is a product of translation and interpretation. The original words and their real meanings are yet to be fully understood by our late 20th century ears. Mesopotamians, in special, received the weigh of derogatory criticism from cultures that assimilated the best of their culture, but chose to ignore their sources, i.e. Judaism, Persians, etc. Take the word high priestess, the mystic sorceress who served the gods and the community in Mesopotamia, for example. The term high priestess has no meaning within the established fundamentalist religions of present times, and is full of negative undertones in Christianity, Judaism and Islamism. A high priestess in Mesopotamia was a woman of secular and spiritual authority equal to the monarch, with unquestionable scholarship, the administrator of huge temple complexes which catered for the needs in all levels of the community. She could be the king's consort, but not necessarily the queen herself, because a high priestess stood as her own person first and foremost, and not as a subservient appendix to any other secular authority. Enheduanna, the daughter of Sargon, the emperor who unified Southern Mesopotamia, was herself an accomplished poet, and was the first scribe to have her name inscribed in clay tablets for posterity. She was a high priestess of Nanna, the Moon God, the Great Ruler of Time, and started a tradition that lasted for 500 years, whereby Mesopotamian monarchs chose their most gifted daughters to be holders of the post of High Priestess of Nanna at Ur. Perhaps the last representative of such great feminine figures of Antiquity was Cleopatra, Queen of Egypt and High Priestess. For twenty odd years she was the main character in a tug of war between Rome and Egypt which decided the fate of Western Culture, as these two were the superpowers battling for supremacy. Had Cleopatra and Mark Anthony won, our history would have been totally different. Compare now a high priestess of the carat of Enheduanna and Cleopatra with the subservient Abbesses of the Middle Ages or the oppressed Mother Superiors, who decide nothing and obey every single order of the churches of the fathers.

Thirdly, in Ancient Mesopotamia there was no difference between natural and supernatural, as in modern worldview. Mesopotamians lived in a world where everyday events and facts were grounded in the skies, in the Higher Will of the gods and goddesses manifested from the Great Above and the Depths below in all worlds, therefore everything was natural for them. In other words, Ancient Mesopotamians lived in a world where nature reflected the gods and the multiplicity of their qualities (wonder, awe, fear, raw power, etc. ), and therefore everything there was was permeated by a Divine Force to which they attributed all possible names. Of course, they also believed in forces that came from beyond the Physical Reality, but all these forces were part of Nature, and consequently part of the Divine, the Hosts of Heaven and Earth, the Igigi and the Anunnaki.

Finally, to the discerning eye of dedicated Mesopotamian scholars and mystics it is clear to see that through religion the link with the extraordinary was established and through magick mastery over the elements of natural and supernatural realities could be found. How so? By the making of ensouled images, by the chanting of sacred verses and observation of the signs of heaven and earth.

For all these reasons we all who live our lives in the Light of the Mesopotamian tradition see the practice of Magic as a Religious experience and the practice of Religion as a Magical Gateway for Transformation and Action. Magick as Religion and Religion as a Magical Act, independent from what fundamentalists of any creed may think or the denial of technocrats provide us with the tools to change and transform and be more in charge of our destinies, of the destiny of the physical world we live in in the Truest Attunement with the Will of the Spirit. When Enki and Ninhursag created Humankind out of the fertile clay of the Apsu and endowed man and woman with the Spirit of a sacrificed God, what The Magician and the Great Mother desired was for humankind to fulfill its human essence by being the gods' co-workers and representatives of the Spirit on Earth. From the Depths Above to the Great Below, we are the Bond between Heaven and Earth, and bound to the gods we are, as They are to us, by love, service and dedication to Never-ending Workings of Creation, in later times called Evolution.

Magick and Religion, all in all, provide us with the tools to understand Nature as the Manifestation of the Spirit in a myriad forms and a Multifaceted Pattern leading to Wholeness and Holiness, whereby we become the Bond between Heaven and Earth to affect the workings of Existence in all levels, worlds and spheres.