A RECIPE TO CONVERSE WITH FAERIES 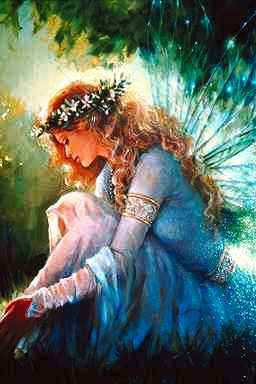 Ecomagic and politics as one!

Since last Spring Equinox I have been working with the Fairies and the Spirits of the Land for the protection of Britain, Brazil and Iraq (do not groan! I have no sympathy for the dictator in charge, but pity the Iraqui people). The choice of these three lands was obvious: my home has been Britain for the last four years, I am Brazilian by birth and a Priestess of Inanna/Ishtar in the Fellowship of Isis. Inanna is the Great Goddess of Love and War of Ancient Sumer, Modern Iraq.

I decided to work with the fairies and the guiding spirits, the heroes and ancestors/ancestresses of these three lands to attempt to heal certain major issues that I felt needed some looking after. This is the point where the seemingly dirty word politics came into play. I thought deeply about the Mage-Priestesses and Priests and Priestesses Queens of ancient Mesopotamia, whose leadership was based on the sacred Measures of Earthly and Heavenly Powers, the Mes, to serve the lands and the people who were those lands. These men and women were religious and secular leaders, mystics and doers. How could then a 20th century garment of Inanna, living in urban London perhaps attempt to make a difference and honor the Foremothers, Mage Priestesses and Priestesses-Queens of the olden days? I decided to choose a cause to fight for for each of these lands. Politics and ecomagic practiced by an urban priestess to attempt to affect change at the deepest social level and inner corridors of power within my three chosen lands.

For Britain, I initially chose the protection of single mothers and their children. Remember that when I started doing this magical working, single mothers were being singled out as scapegoats for public money spending. I said initially because other causes that came into my way, such as the floods in Wales and Cornwall, snowstorms in Scotland, etc.

For Iraq, I have worked for the Shiahs of the marshlands, who have been cruelly persecuted by the dictator in charge, with the ancestors, justified men and women of the land, and for the healing of the wounds between Iraq and the rest of the world. I call this region Modern Mesopotamia on purpose. Whoever loves ancient Mesopotamia, cannot evade from the moral and spiritual responsibility to pray for peace, wealth, love and health for modern day Iraq and Iran.

For Brazil, I decided to give the power raised to the ancestral powers of the land to strengthen the National Congress to work for democracy and Brazil's economic recovery. I also prayed for the street kids, girls in special.

This is a weekly practice: a simple ritual performed on Tuesdays (Nergal's/Mars' day), alternating the lands. Other lands came into this ritual when there was a need: Rwanda, Indonesia, Russia, you name it! Lately, East Timor, earthquakes in Turkey, Taiwan, etc.

Some of these causes "came" to me, or it simply felt right that I did something about them at the time. The list of synchronicities is endless, Perhaps one of the most remarkable was a TV program that led me to work for the Shiahs, right after the first ritual I performed for the protection of Modern Mesopotamia. In the ritual, I had asked the Powers of Air for vision, guidance and peace for Iraq. Ritual ended, I switched the telly on, and there it was, a full program on the hardships of the Shiahs of the marshlands of Iraq, how they were persecuted by both Saddam Houssein and the Iranian fundamentalists. Another time it was Tuesday and I was too tired to do anything, and the ritual that week was for Britain. Thus, I simply knelt in front of my shrine and offered the drive, enthusiasm and ideals that I put in everything I do, my work in all worlds, as a sort of Sacrificial Priestess-Queen offering. When I finished this sentence, the influx of energy I received was so great I could not go to sleep for hours!

How did I initially proceeded? Having chosen the lands and the causes, I proceeded to contact the Faery and Underworld realms to ask the permission and blessings of their Hosts to work with Them. I formally requested this permission on the Autumn Equinox.

The third and most important step is to contact with the voices and guardians of the lands and work with them to affect the chosen cause. As this is a work done at the deepest level of socio-political and economic realms, I raise energy and give it all to the Guardians/Faery Queen and King/Elementals so that They use it all to for healing the best way They find fitting. The Guardians know about Justice and Healing, balance, cosmic and natural order. I am just the mortal co-worker, although we have made blessings together in special occasions. To close the ritual, I thank whoever comes and is invited, bid farewell and promise to come back next week.

I have worked with myths and god/dess forms of these three lands and many have been my gateways to the Underworld: the roots of the Huluppu Tree, a gate under the sea, the classical descent down a staircase, etc. Take your pick. There are many ways to do ecomagic, and it is important to go beyond the visions of lovely grassy meadows to dive as well into the muddy polluted waters of a nearby river to cleanse it, for example.

What did I learn with my experiences conversing with Faeries, Ancestors and Guardians in the last eight months? That the Innerworlds sustain the Outerworlds and that it is possible to redeem the Outer Earth by giving back to Her the missing elements that have the potential to regenerate and heal.

But most of all, I learnt that the Sleepers, Guardians and Heroes of all Lands always do wake up when they are needed.

All they require is the Kiss of Love and the Integrity of one's purpose.